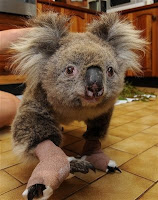 SYDNEY "Sam" the koala, the most famous furry survivor of Australia's worst-ever wildfires, is healing well thanks to the efforts of caretakers at a rescue shelter - and she even has a new boyfriend, "Bob."

Sam, who captured hearts around the world after she was photographed drinking from a firefighter's water bottle, has also won the affection of "Bob," another koala whose paws were scorched in the weekend's inferno, caretaker Lynn Raymond said Thursday.

"Bob is her protector - as soon as she is moved, he's on the move, too. It really looks like he's making sure she's OK," Raymond said from the Mountain Ash Wildlife Shelter in Rawson, 100 miles (170 kilometers) east of Melbourne in Victoria state, where the deadly fires continue to burn. "They're good company for each other."

Neither koala is likely to be healthy enough for release for at least four months, and are being comforted by caretakers who salve their scorched paws every few hours.


A Koala nicknamed Sam, saved from the bushfires in Gippsland, is cared at the Mountain Ash Wildlife Center in Rawson, 100 miles (170 kilometers) east of Melbourne, Australia, where workers were scrambling to salve the wounds of possums, kangaroos and lizards Wednesday, Feb. 11, 2009. More than 180 people were killed in the weekend's fires, and on Wednesday, the scope of the devastation to Australia's wildlife began to emerge, with officials estimating that millions of animals also perished in the inferno.
Posted by Matzo at 5:15 AM