And days just blurr into one sometimes

The day started out early as usual. Off to teach my newbies how to use computers at NWTC in Oconto Falls, roads pretty well plowed from the surprise snow we got. YouSoStanky anxiously waiting his trip to the forest that was delayed by the 6" of snow on top of the cages. He needs about 3 days of decent weather to find his way & new sleeping arrangements in the forest. And no wind. Coonies don't like wind. They don't like to be touched and they are really afraid to be touched by something they can't see or touch back. So they hide from high winds.

I have some wonderful students in my class. One happens to own Maple Valley Orchards in Maple Valley and was discussing the donation of apples to the food pantry there in the Falls, you know? A delivery date for them [another student helps at one of the local food pantries]. So asking what apples were not human edible, he donated many bushels of apples to the Wildlife Orphanage. What a special treat to be able to feed apples to the coonies with a foot of snow on the ground!! When the roads up that way are driveable we'll take the ghetto van and go get those apples. Maybe on YouSoStanky's release day, who knows?

Around 2 p.m. the Eagle Herald came to do an interview for the newspaper and take photos of the Coondo & inhabitants. The photographer [Rick Gebhard] was like a kid in a candy store. Writing notes on his notebook and holding them up to the CoonCam for all the viewers to see. He was so funny. His poor colleague [Don Williams -- whom I hear is retiring] wasn't quite dressed for the outside weather and kept going to warm up while the photographer & I played with Shazbot. lol. YouSoStanky & the LilDood couldn't even be seen. Seriously, I looked in the mini-coondo and couldn't see where they were hiding!! They never even peeked out. This is wonderful as it means they are avoiding strangers! Definitely what we want to see before release of a wild one. As soon as they left, the boys were right back out as was Hiway, but she was still pretty upset about visitors. The article should appear in the Eagle Herald next week. What a wonderful opportunity to tell the community that spring birthing season is upon us and to please check Dory & the Orphans website BEFORE you try to help any wild animal. Your help could kill them and they may not need help in the first place. Babies with mother not right there does NOT mean mother has abandoned them. She needs to eat to produce milk to feed them. 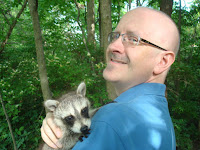 At approximately 7:44 pm central time news was received from a Missouri LBA member that his brother Keith William Nolan (43) had succumbed to lung, stomach and brain cancer. Keith was a nationally famous researcher, historian and author, he had one daughter Britt (9). Keith was a wonderful and kind man. He was a volunteer and worked with raccoons exclusively about 10 years ago at the old Ballwin shelter. Erik says "He really helped me with my coonie litter last summer, until his doctors told him not to interact with them because he was so ill." The photo is one of the last times Keith was able to hold a coonie. Our prayers are with you Erik and your family.
Posted by Matzo at 5:59 AM