It would appear October has snuck up and gotten here. Balmy day in the Northwoods at 58 degrees and sunny. Weather reports say it will get a bit warmer for a few days and to expect 70's and 80's. 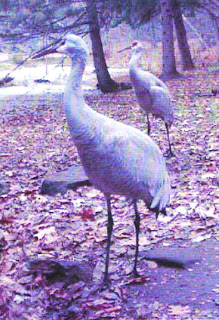 No new pictures to post this morning. So thought I'd post a picture of my Peepers for those of you who might be wondering about her Big Adventure. She was a tiny baby when she came to me - just days old. She had been run over by a disk on farm equipment while coming out of her egg. It split her head open pretty badly. At that point, she was given "24 hours to live". So I was called to care for her. The photo on the right is her 'success story'. She is shown on the photo with her mate of many years now. Both have only one eye and will remain at the Chippewa Falls preserve for life. 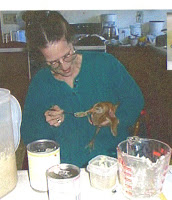 The photo on the left is my first success with Peepers. Getting her to eat. She had not eaten for anyone and was seriously stressed by this point. She was terrified of everyone and everything. But she found comfort with me. That's about the point the Zoo owners began to call me "Mother Nature". I made her some Mother O'Malleys Crane Stew which she was eager to devour. And the rest is history. Perhaps one day those photos can be organized and shared with you as well. Sandhill Cranes are very special and intelligent creatures. Once you share your life with one, you are never the same.
Posted by Matzo at 8:31 AM