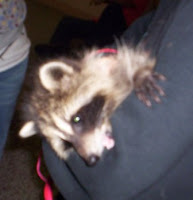 Shazbot's first glimpse of the hallways of high school is the photo on the left. Students everywhere, sitting along the walls in cheerleader uniforms, walking around socializing, the team wearing their football jerseys, and generally arriving to school in time for a quick breakfast and classes to begin for the day. In the photos, her name is Sarah because her Mariah has her in tow. But she is just a little shazbot of a fluffy sassiness if you ask me. She doesn't cooperate too well with getting her halter on. She's getting a bit sassy about it and nipping with those little pointy teeth. She holds her little hands tight across her eyes and sticks her elbows in the way of anything trying to go around her neck. Then she grabs it with skill to be envied, and pushes it away. Snorting, growling, wiggling, twisting and snapping the entire time. So far I'm bigger than her, just laugh, say "whatever Shazbot" and I manage.

Mariah introduced 'Sarah' to the theory of lockers down great big hallways, but Shazbot was more interested in how fast she could run down that slick surface without touching a human, or showing off one of her favorite skills, tying up the ankles of an unsuspecting human with her leash - like a flash of lightening. Until the feet caught her eye. And there were a few students who were very afraid of Sarah - even as little as she is. So we needed to respect their space as well. Others couldn't believe Mariah brought a coonie to school. Nothing like Mary's little lamb, that's a fact. After a little while, other students spotted them and had to touch her fur and just watch the little furbutt in action.

Students walking down the hallways to their locker, or just to hang out around the door of class were a little surprised when walking around the corner and laying eyes on a little ball of fluff running around the hallway on a neon pink leash {matches her little halter}. The word "coon" began to echo down the hallway and others had to come check it out. Most of the innocent bystanders taken aback by this 8 week old coonie fell instantly in love upon touching her silky fur. Shazbot had to be bathed with baby shampoo when she arrived at Dory & the Orphans rescue. Her fur will never go back to the tightly woven undercoat that she would develop each fall. She will have thick fur, but not the undercoating that insulates much better.

It wasn't too long after that echo "coon!" went down the hallways before the cafeteria ladies had to each go take a peek for herself as well. About then the bell rang and scared the little coonie to mom, and class began. Shazbot was able to demonstrate a lot of different skills to the students in the classroom. Like how fast she could climb the book shelf, and how quickly she could jump on the cheerleader's white tennis shoe. She showed them how skillfully one cup of water in a non-tippable dish can be turned into a nice swimming pool of sorts, right there on the tiled floor. She demostrated how nicely she can growl when she wants to get her way, but mostly just ran around everywhere with her Mariah on her leash while I talked about wildlife rehab.
I think secretly Mariah and 'Sarah' were happy to spend time together like they are accustomed to. Since school started, Mariah hasn't been home to spend the same hours with her little rehab. When the Shazbot got home from the class, she just zonked out on her back and looked quite content with herself.

Her nap was cut short by going back for a second class at 12:20. Since the morning class was a nice, quiet, very well behaved group of students, I decided that Hiway could come along for the second class. Hiway spent the night outside with Lillian & Benjamin last night, so when Shazbot was napping, I went out to get my girlfriend and spend some time. Unlocked the cage door, got the halter on her, but when I looked there was a confused little coonie looking at me with her little hands stuck in the halter. A look like "what in the heck is going on here anyway?" So I picked her up, she clung on extra tight with all four paws, and inside we went. Put her down and she looked around like everything was new to her. Then when Kamir {my guard dog} came over to say hello, the little coonie just fuzzed up and was a bit upset. I looked at her tail and said "you aren't Hiway". It was Lillian. She was pretty happy to get back outside to Benjamin and trade places with Hiway. Hiway just steps right on into her little halter like it's old news. After helping me sort out the paperwork and hand outs for the second class, off the three of us went back to high school. Hiway wasn't too sure she liked having extra people around, and she stayed in her kennel until class started. She walked around on her leash, played with Shazbot {who had Mariah on her leash}, and generally explored the room while I talked to the students about wildlife and wildlife rehabilitation.

Even though the trip was short and sweet, both little girls {Hiway in the photo on the right and Shazbot above} were quite happy to be back home where they know. Dory & the Orphans should be proud of these two little ambassador orphans, I'm sure they left their footprint in the history of the Coleman Cougars.
Posted by Matzo at 3:03 PM